HistoryThe Name
Who better to tell the story of the Cabo Wabo Cantina than Mr. Cabo Wabo himself, Sammy Hagar. And we quote:

The Cabo Wabo Cantina has generated enormous curiosity from the day it opened. At first, it was because of the time and place.

In 1990, Cabo San Lucas was pretty small for such an elaborate nightclub. Later, when this town at the tip of Baja California grew into the prominent vacation destination that it is today, it seemed as if I had looked into a crystal ball. The truth is that the concept was evolutionary and the reality of what it has become is based on small steps, a lot of mistakes, a few good people and tons of luck.

When I arrived in Cabo San Lucas for the first time in the early ’80s, I fell in love with the town. It was just a fishing village then with only one major hotel. No phones,
no television and no newspaper.

On my second visit, I met Jorge Viana, who now manages the Cantina, and told him that I wanted to open a tequila bar with a small stage so I could perform there when the mood struck me.’Any musician who wants to will be able to play there,’I told him.

Jorge regarded me with the politeness that Latinos reserve for dreamers. But I persisted and only convinced him that I was serious after I brought him to the United States and had him as my guest at a concert in San Diego.

By then, I was already in Van Halen and had written the song “Cabo Wabo” with Eddie Van Halen. But the Cantina was always my project and not the band’s.

Jorge and I then started shopping for properties. When we had the property we wanted, we held a contest among local architects in Cabo San Lucas. The winner was Marco Monroy. I was happy that it was Marco, because he and I had already become friends. When Marco brought his design to me in Los Angeles, I was impressed, but didn’t notice that his measurements were in square meters and not square feet!

During construction, Van Halen was on tour and Jorge was in charge of the details. So by the time I first saw the Cantina it was almost completed. ‘I can’t believe it’s this big,’ I told Marco. ‘This is way too big for Cabo San Lucas. But, I like it.’

Of course, I wanted a monster opening that included MTV coverage. Since Van Halen was going to participate on my behalf to make the grand opening a major event, I felt a sense of camaraderie. It seemed appropriate to offer the other members of the band financial participation in the project. They accepted.

At first, because the cantina was a novelty and had received worldwide press coverage, business was good and everyone made money. But management was shaky and the club soon became a white elephant. Then it began costing the band big money. When it did, the other members of Van Halen no longer wanted any part of it.

But it was my baby and I wanted it even if it was a white elephant. I believed in the project. It just needed proper attention and better management.

When I assumed total control of the Cabo Wabo Cantina, Marco asked if he could come in as my partner because he believed in the project. This was in 1994 and he became my partner that year. The building was redecorated, the restaurant was moved upstairs and a prime chef was brought in. Soon Marco had the local population involved and coming in to enjoy themselves.

By then, the Cantina had become the place to go in a town that was already a destination of choice. It has helped, too, that Cabo San Lucas has almost tripled in size since my first visit. It is no longer a simple fishing village.

Because of my current partners in the operation and the enormous amount of publicity that Cabo Wabo receives in the United States every year, the success and size of the project has become much more than I ever imagined it to be.

Besides MTV, the Cabo Wabo Cantina has been featured on the Travel Channel, VH1, E and many television shows. Voted as one of the Top 10 party spots in the world, it is still my baby. Even so, it has grown into a monster that has a life
of its own – one big party animal.

Wow! All that from a dream!

Go there and enjoy yourself. That’s the reason the Cantina
was built! 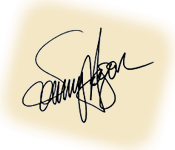 Of course, no history of the Cabo Wabo Cantina is complete without the story of the name – it goes like this:

Driving into town one day, Sammy noticed a local resident “staggering” and “bashing about” after a night of partying, struggling to keep himself moving forward on foot. As he wobbled into the barbwired fence nearby, Sammy thought to himself, “Hey, that guy is doing the Cabo Wobble!” And so it was born from there – the name that has been with the Cantina for the entire journey!

Cabo San Lucas was just the end to a long dusty road from Tijuana before Sammy and his Cabo Wabo Cantina got here. A sleepy town with a love for fishing and relaxation. Now, the locals and tourists fish for a good time on land and try not to relax too much! They start and end the journey with the Cabo Wabo Cantina – where land ends and the party begins!